Following is a collection of story snapshots from workshop participants. Snapshots reprinted here with author’s permission. 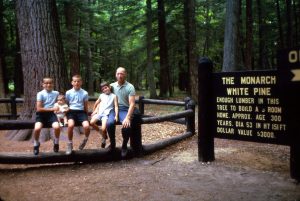 …Probably the outstanding aspect of our trip was the closeness we felt to nature. Sometimes it was a bit too close as when a bear in Banff National Park raided our food box, knocking over the scooter in the process, wrecking the container and making off with our prized ingredients for fudge. While we did enjoy doing some sight-seeing in major cities like Niagara Falls and Ottawa, our real joy was marveling at how our senses were stimulated as we putted along at an average twenty-five miles an hour. We were at the center of our own universe. Scene after scene of exquisite beauty unrolled before us. Our eyes were cameras recording majestic snow-capped mountains towering above racing rivers and forested mountain sides; the vast, multi-colored prairies of central Canada; the thick forests and lakes of Ontario, the quaint reaches of rural Quebec. Exposed to 360 degrees of nature at all times and being outdoors almost twenty-four hours every day, we perceived sounds often muffled in daily life: distant train whistles, cascading creeks, wind swooshing through firs. And the smells! Oh, the refreshing smells – of pure air, pine trees, humus damp earth, freshly mowed hay. Less refreshing but equally strong and natural were smells of dry dust, stagnant water, and farmyard manure. Our sense of touch was plentifully stimulated, too. After sixty to eighty miles of sitting, even a padded seat began to feel hard, though after such a long day’s drive, sleeping on the ground, no matter how bumpy, felt good. We didn’t eat out at all. We cooked all our own food often buying the basics at a farmers’ market. I catered to my husband’s insatiable sweet tooth by making chocolate fudge at least twice a week….. Sylvia C.

…Agates are one of my simple, slightly guilty pleasures, any beach I go to welcomes me and challenges me to find them. Spending time finding agates gives me time to let my mind wander, somehow when I am searching for these banded, jelly rocks and get distracted by talking on the phone or thinking hard about something I find more treasures than when I am more purposefully collecting. I sometimes forget about agates but all of a sudden my subconscious kicks in and I find one, a true gem. Hunting for agates has become part of the fabric of my soul and will never go away, when I find one I know it is a unique stone, a one of a kind, with its own story and impurities which makes it all the more beautiful… Donna M.

“Hey, Man. Yeah, you! Do ya wanna play some pinochle?” I heard someone shout from a bunk behind me in the Pusan Army rehabilitation hospital one morning. Since every morning was more or less the same during the week, I felt ready to break the grind any legal way I could.

I turned around, which took some doing while sitting on a single Army bunk and shouted back, “Sure. Why not?”

And thus, I met yet another inmate of my own personal hell in South Korea during July of 1951. Pusan was about as far south as you could get without wading out into the ocean. I finally swung my legs over and stood up, slowly since I seemed never to remember not to try to push myself up with my right hand. It was still recovering from surgery that removed shrapnel from inside the joint of my little finger. Well, I still had all the parts of my body, unlike some of the other inmates….. Jim H. 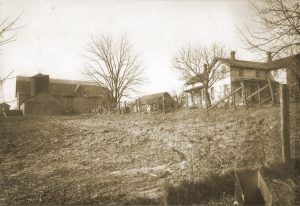 I was the first girl. The first granddaughter after 6 grandsons on my dad’s side and the first after 3 grandsons on my mom’s side. In our rural neighborhood I was the first girl after 5 boys. In my family, I was the third child, and the first girl. So I came into this world as a girl surrounded by boys. There were no other girls in my life except my mom. Of course everyone was ecstatic to finally have a baby girl in their life , but I think they were in for a surprise.
I liked this world of boys. I loved the outdoors, being active and physical, exploring, climbing, chasing cows. and other farm animals. I wanted to be outside with dad and the boys rather than inside with the domestic activities. The problem was, no one else understood that. Instead of learning to sew, embroider, play with dolls, learn to iron and set a table, I wanted to dig potatoes, haul wood, build a bird house, or tend to the cows. So, I tried; tending to the cows that is….. Chris A.

…I really think mom’s interest in healthful living all began with trips to visit Emily. Emily was a little, old lady with librarian type glasses and gray hair neatly pulled back in a bun. She had so much spunk and energy, but as a child I always thought she was so old. When mom visited Emily’s health store she most often came home with supplies of vitamins and “healthful” powders. We knew when mom made a trip to Emily’s, we could expect funny things to appear in our food for the next month. At one time mom was on a liver powder kick. Our corn bread, soups, breads, meatloaf or other dishes we didn’t even know about took on this strange brownish color, and well, you can imagine the altered taste. We would pleadingly look up and inquire if we had to eat this liver powder flavored food. Mom just smiled at us and said it was wonderful and yes we had to eat it. Thankfully the liver powder phase was short lived. But there were other phases. There was the Hoffman hi-protein powder days which lasted a long time. There was bacon yeast sprinkled for flavoring and alfalfa greens for drinks phases, and I know there were others, but too many for me to remember. However of foremost importance was the philosophy that healthful living was paramount. While other teenagers were sneaking around trying to get alcohol from their parent’s cupboards, we were trying to sneak and get white bread, or maybe, maybe a candy bar…… Kat C.

The Fall 2022 schedule for Through Your Eyes ~ Writing Your Life Stories is in the planning. Please note, there will be several brand new course offerings. Please check back as information will be updated, or Contact Heidi.